A ten-year project where a person who matched a statistical profile of an average citizen in Sweden was offered the opportunity to influence the Swedish public opinion she statistically represents. This was done through a long-term strategic plan which combines research methods of social psychology experiments with the most sophisticated techniques of opinion-making drawn from the political lobbying, PR, spin, and marketing industries.

A compilation of the the two installation videos that are a part of the presentation of The Average Citizen. 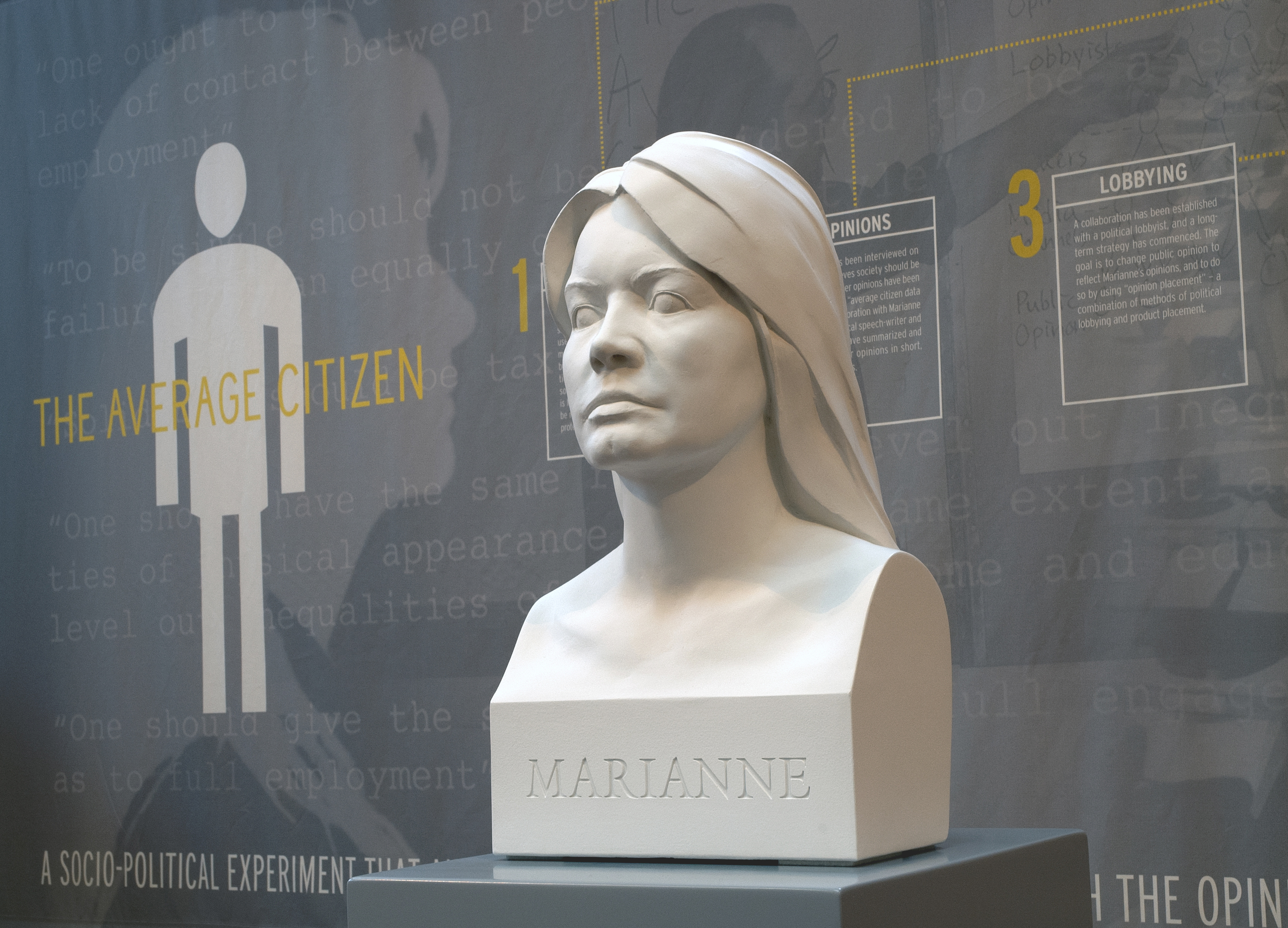 Marianne, the person who matched the statistical profile of an average citizen, has been interviewed on how she believes society should be changed and her opinions have been gathered in an “average citizen data bank.” In collaboration with Marianne, a political speechwriter and a copywriter have summarized and formulated her opinions in short, forceful soundbites. 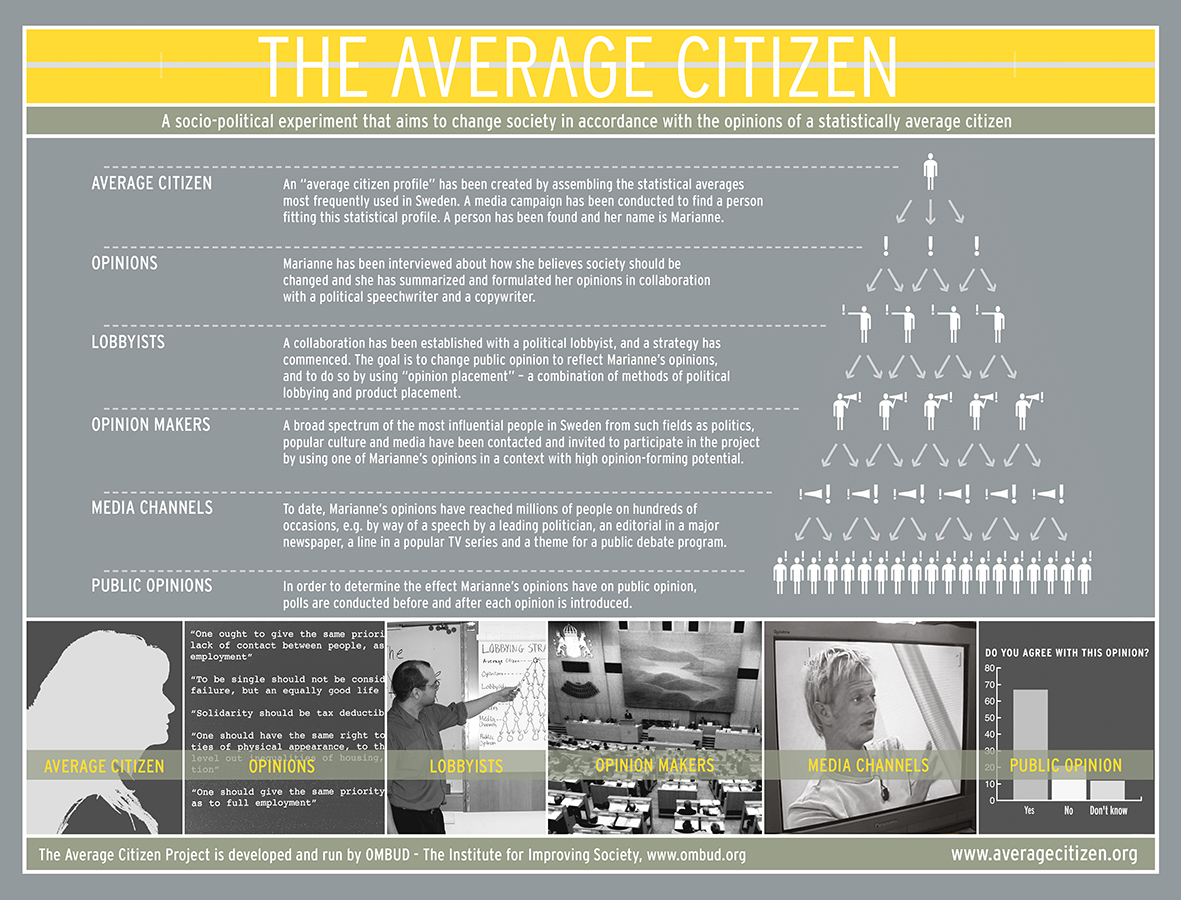 In cooperation with a political lobbyist, a dramaturge, and an expert political consultant, a long-term strategy has been drawn up for how the average citizen Marianne’s views are disseminated to Swedish society and, in the longer term, made to influence public opinion which she statistically represents.

A broad spectrum of the most influential people in Sweden from such fields as politics, popular culture, and media have been contacted and invited to participate in the project by using one of the average citizen Marianne’s opinions in a public context with high opinion-forming potential. As with all effective lobbying, Marianne’s views are presented indirectly, so the public is unaware of the identity of the originator of the opinions.

To date, the average citizen Marianne’s opinions have reached millions of people on a large number of occasions, e.g., by way of a speech by a leading politician, an editorial in a major newspaper, a line in a popular TV series, and a theme for a public debate program.

During the course of the project, opinion polls have been conducted both before and after an opinion has been introduced to the public to determine the effect the average citizen Marianne’s views have had on public opinion, which she statistically represents.
‍ 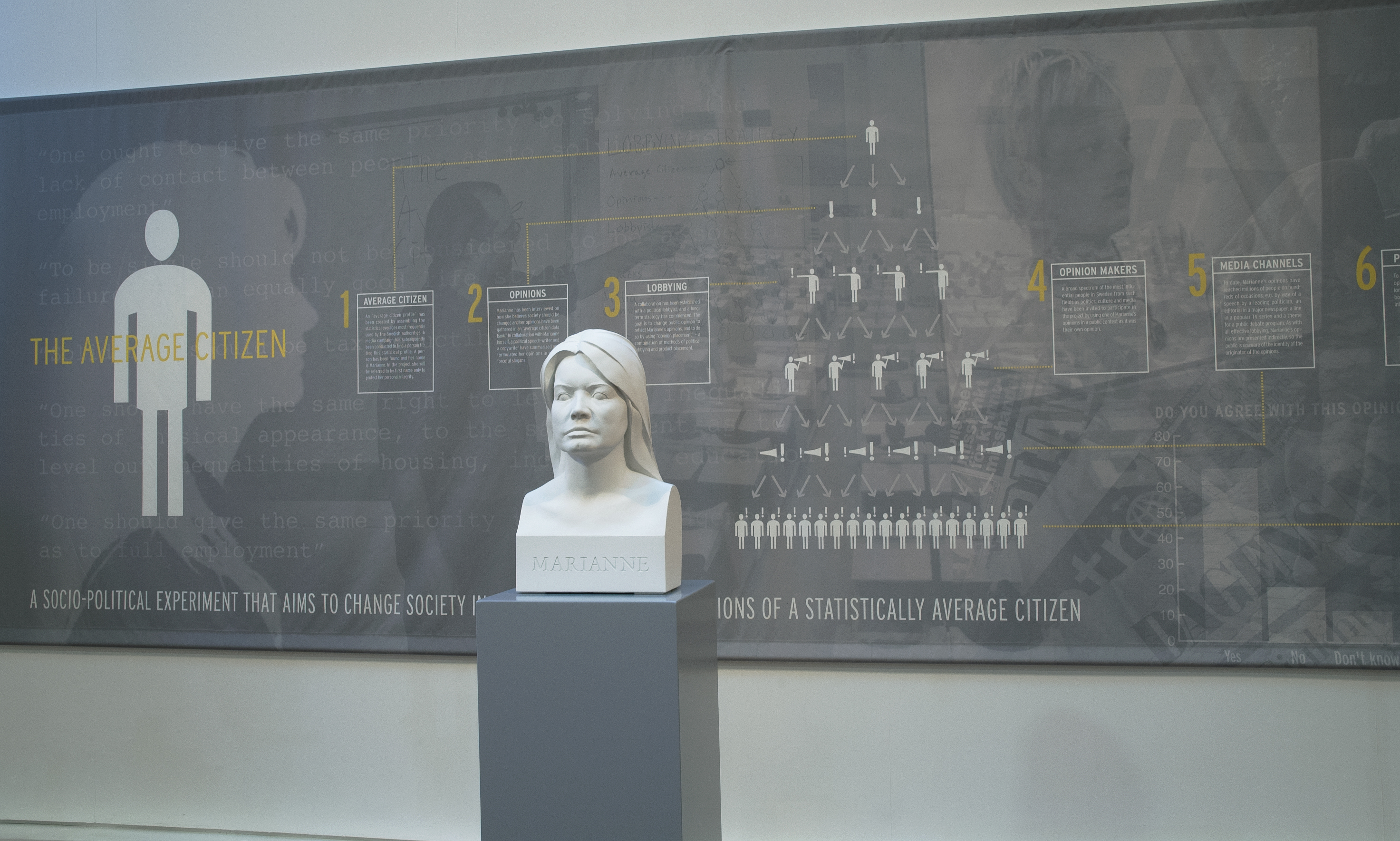 The Background of the Project

Statistics have been one of the 20th century's most effective instruments for social change. By incarnating the goals of the sciences – to be able to translate a complex reality into a rational and easy-to-grasp model, statistical type, median and mean values have formed the very foundation of Swedish social engineering. In the popularisation of statistics, a typical individual who summarises all the characteristics of a nation or some other population group has often been used.

This fictitious, statistical person, who is referred to in Sweden as "the average person", "the average Svensson" or "the average citizen" provides the basis for research, debate and planning by government agencies of most public sectors of society that affect the daily lives of citizens. But even other parts of the society such as commerce and industry, trade, the media, advertising and the services sector largely adapt their services and products to the average preferences of the clientele they are focused on.  Last but not least, the principle that an individual citizen may represent a larger population is the very foundation of representative democracy, in that political representatives are elected in general elections.

The current democratic system is, however, facing a number of serious problems in Sweden (as in many other countries). In an inquiry into democracy commissioned by the Swedish government (Demokratiutredningen), it was found that civic engagement has declined and that the interest in political issues that does in fact exist has shifted away from the traditional party politics to "single-issue organisations".

At the same time, the political influence of commerce and industry and the major interest groups has increased through professional lobbying, and political parties have also become increasingly dependent on PR consultants and effective marketing to get attention for their issues.  In an increasingly mediatised and lobbying-dependent public conversation, the individual citizen's opportunities for getting an issue onto the political agenda are fairly limited. Sweden's representative democratic system gives every citizen a statutory influence at the ballot box every four years. Between elections, the citizen only has recourse to writing to a representative or contacting their local member of the parliament.

Citizens are also afforded the opportunity to present their views on, for example, the daily newspapers' letters to the editor pages, on talk radio programmes, by e-mails and SMS to current affairs programmes and on internet forums, blogs and social media. But these channels have often a more symbolic function than any real political impact. Today, getting media and in particular political attention is not only about being able, in practice, or having the formal right to, get a question onto the political agenda. Increasingly, it is also about who, in what way and in what context this is done.

Even if the individual citizen has few channels through which they can directly make their voice heard between elections, political parties and policy-makers nonetheless indirectly learn about voters' opinions and preferences through opinion polls and statistical research. Not infrequently, it is precisely the average voter to which political parties adapt their policy programme. Statistics and opinion polls therefore already constitute de facto a fundamental and sometimes decisive factor for political decisions.  The Average Citizen is an interdisciplinary project which takes its starting point in and draws consequences from this realpolitik situation. The project was designed as a socio-political experiment that explores a reverse representation. Instead of citizens choosing their political representatives in general elections on the basis of how they believe that the candidates represent the citizens' opinions, a person was selected to represent the citizens because in purely statistical terms she is the equivalent of the entire population based on its demographics and socio-economic living conditions. This is a method that is independent of the statistically representative person's political contacts, social networks, media charisma and financial resources – all factors which are governing Swedish politics all the more. Here is a description of the project's structure
* Marianne is, by her own request, only referred to by first name in order to protect her personal integrity.

Selected Exhibitions where The Average Citizen has been presented
‍ 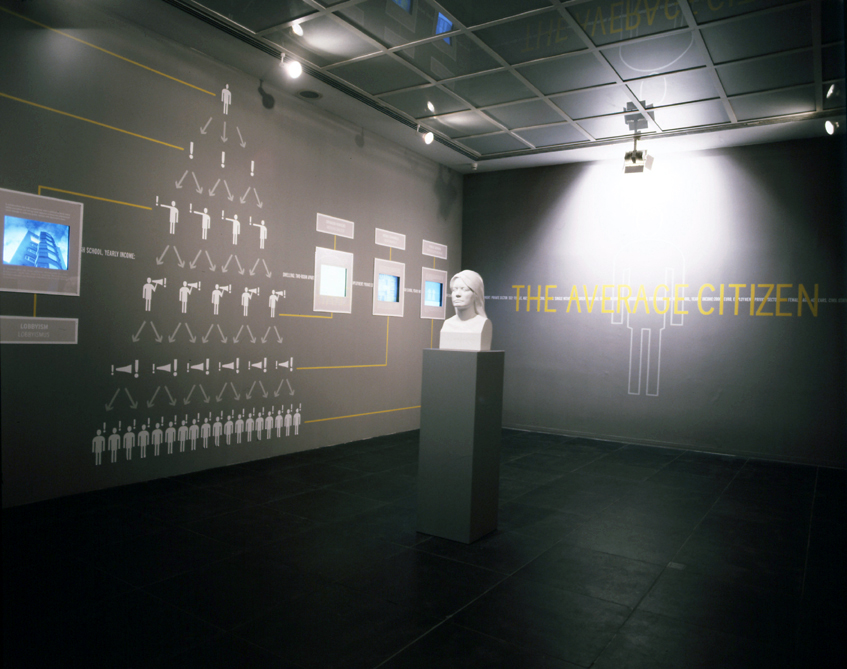 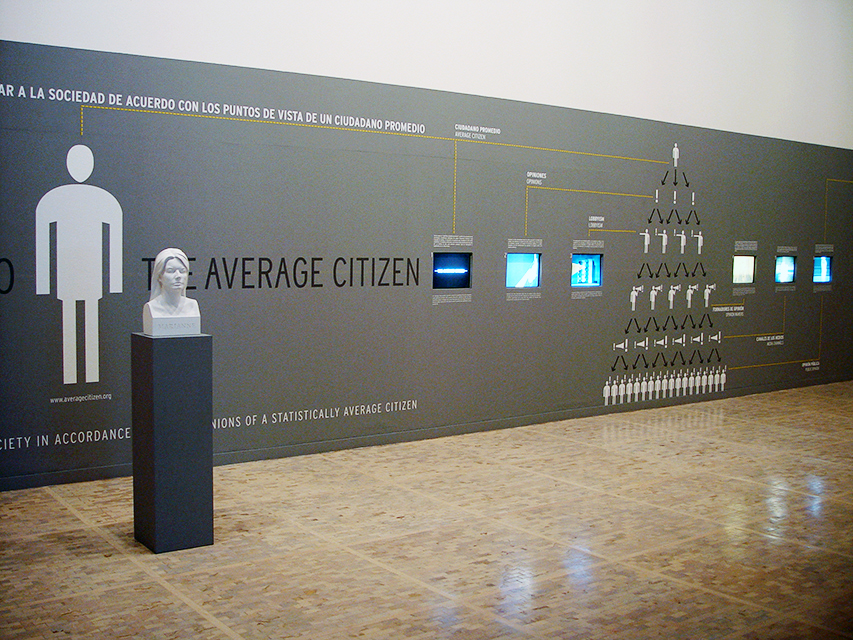 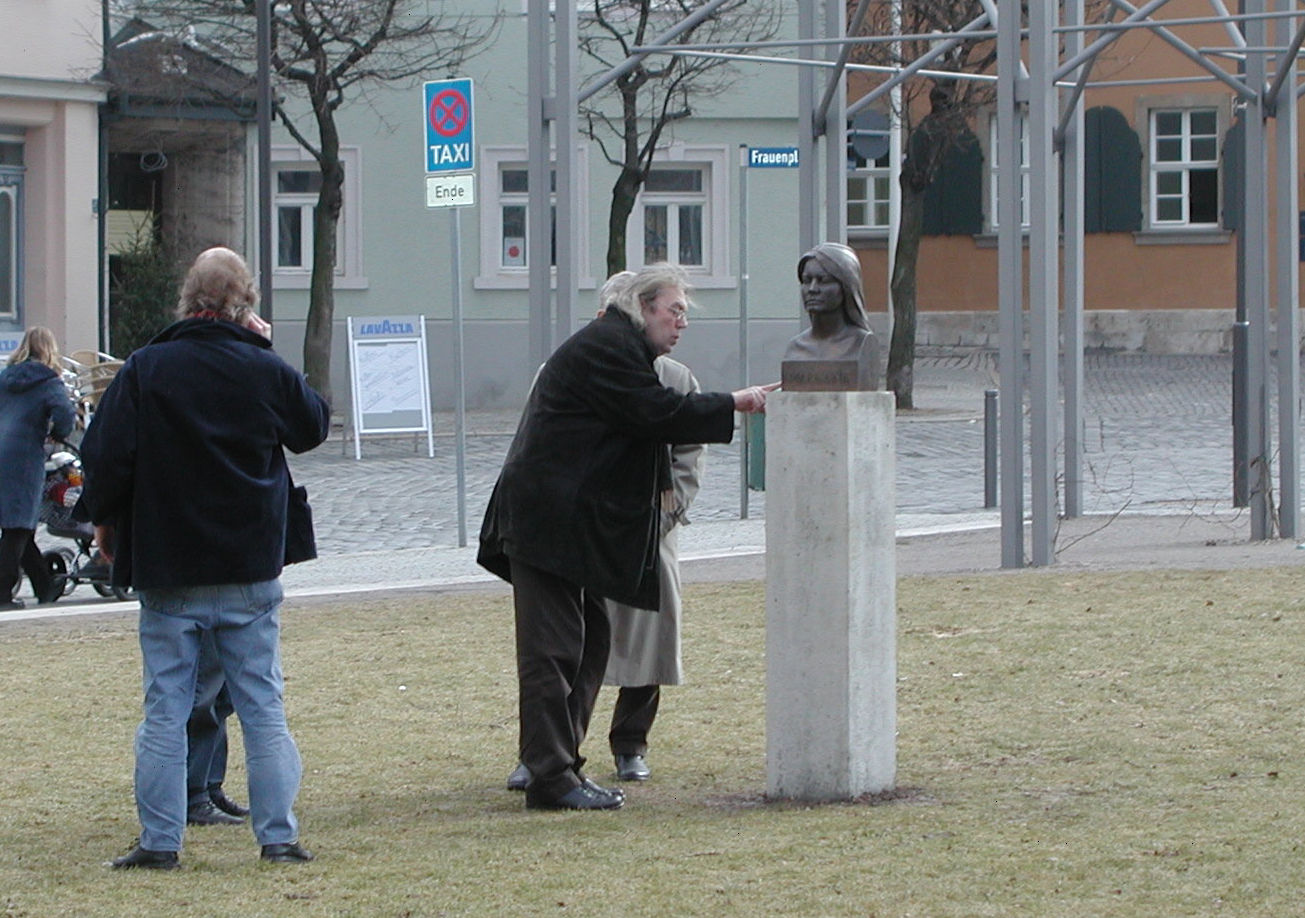 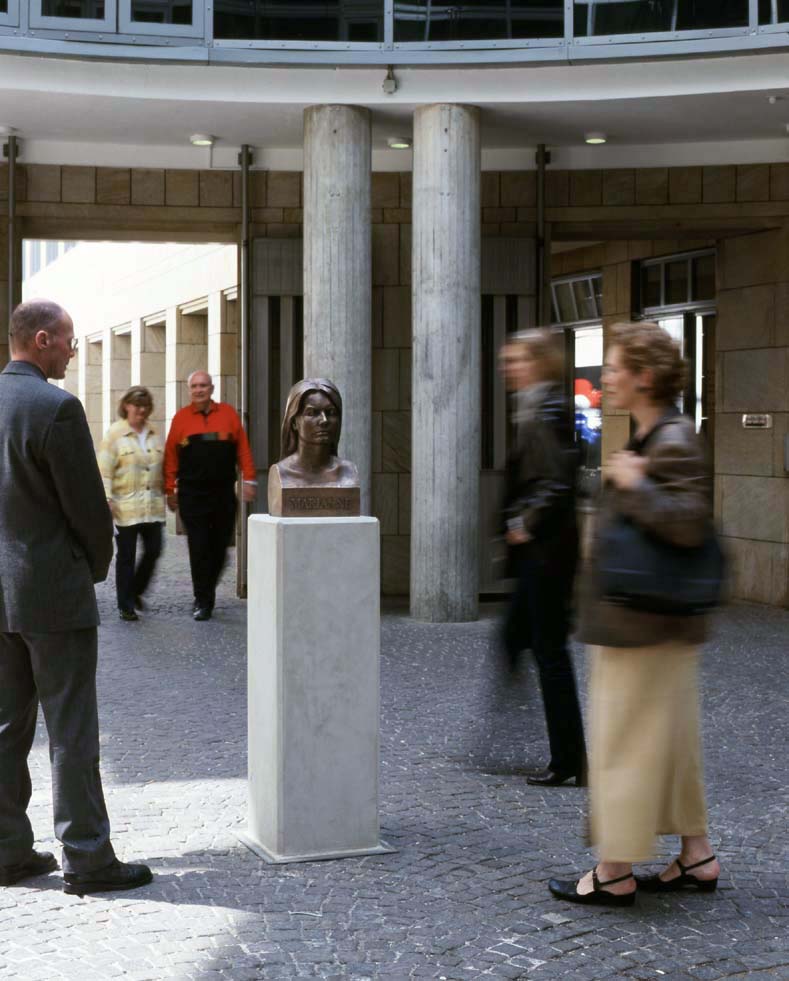 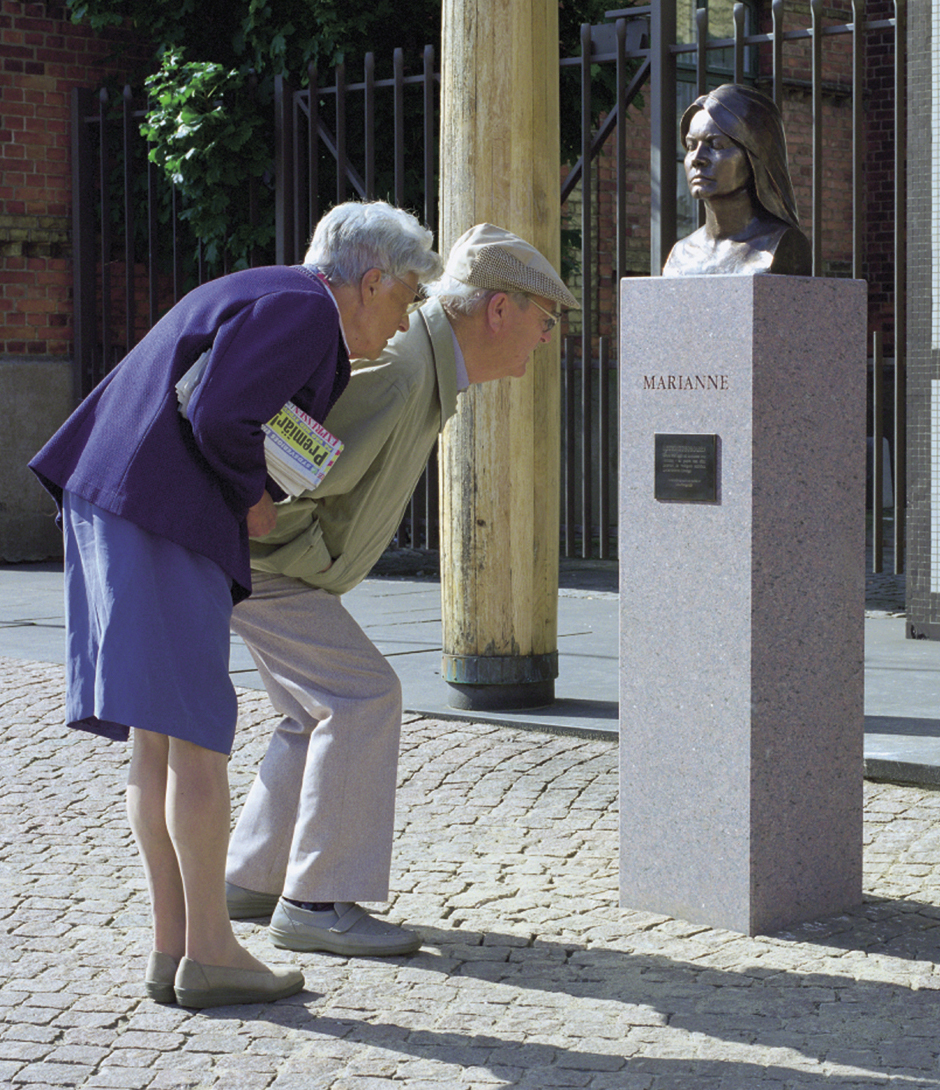 Bronze bust on the town square of Simrishamn. 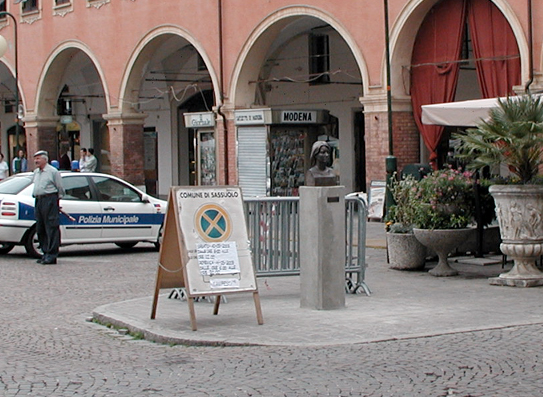 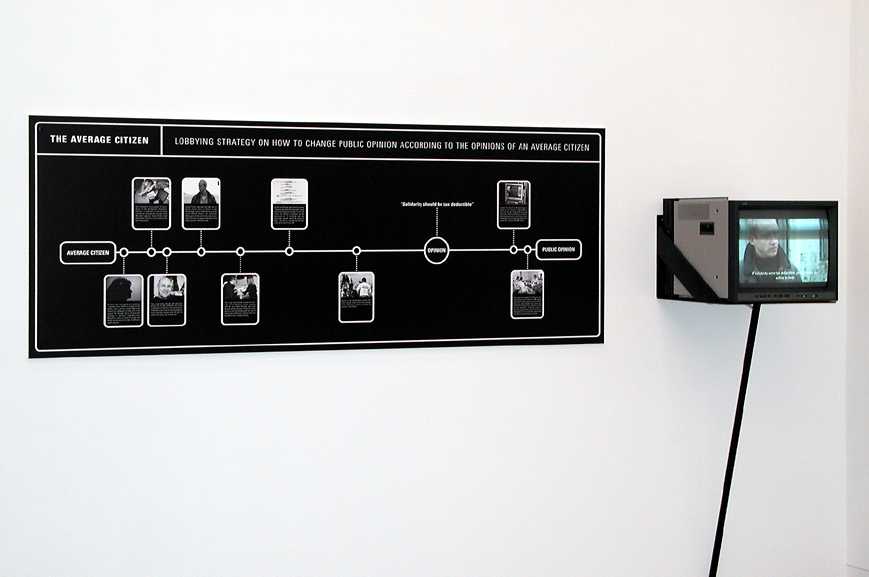 Exhibitions which have presented different parts of The Average Citizen Project

Selected Books which include The Average Citizen

We Are All Normal and We Want Our Freedom: A Collection of Contemporary NordicArtists Writings, Sander, Katya & Sheikh, Simon (Eds), Blackdog Publishing, London 2002

Selected Quotes about The Average Citizen

"Måns Wrange’s project The Average Citizen examines the new conditions in which power has shifted from a politically constituted public to those who professionally manipulate public opinion and the political process. […] This art and amusing work places the change in public life under examination, mocking both the old attachment to the human mean, and the troubling corruption of the new system. It further suggests that the fragmentation of the social body under the pressure of economic recession and cultural divergence has played a part in opening politics to the manipulation of competing groups, the most powerful of which are moneyed.”
— Julian Stallabrass, Art Incorporated – The Story of Contemporary Art, Oxford University Press, New York 2004
“Other works succeeded in transforming social critique into real activism, as in The Average Citizen Lobbying Project (1999-2002) by Mans Wrange of Stockholm. This multi-medium installation, one of the most compelling works in Manifesta 4, celebrates Marianne, a real person embodying a statistical portrait of the average Swedish citizen. […] Through slick media graphics, the installation traces the dissemination of each view and its actual
impact on Swedish society. A portrait bust of Marianne sat at the center of the gallery, and another outside under the rotunda of the Kunsthalle.”
–Susan Snodgrass: ”Manifesta 4: defining Europe?,” Art in America, January, 2003
”Among the few individual contributions that left an indelible impression … [was] Stockholmer Mans Wrange's study in socially engineering the political opinions of the demographically typical European citizen (forty, single, female, and childless) into a new political orthodoxy. As an exploration into the power of averageness, Wrange's project may well have provided the leitmotif both of the exhibition and of a putative future Europe.”
— Kate Bush, Reviews, Artforum, Sept, 2002
“What makes this scheme more than just another rerun of Conceptual art is that Wrange didn’t just have his eyes on an art audience. In collaboration with the architect Igor Isaksson he assembled a team that includes a lobbyist, a political advisor to the Swedish government, a headhunter, a speechwriter, a copywriter employed by Absolut and IKEA and a media consultant. […] By every available measurement Marianne epitomizes the mainstream in Sweden, but it does not follow that her socio political beliefs are shared by the majority. […] Deftly leveraging the media’s persuasive sirens against her beliefs. Marianne’s voice permeates the majority and invites consent as individual expression elegantly blurs into the majorities will. Should Wrange be accused of exploiting democracy for having turned the opinions of an average citizen into a measurable political influence? The question points to a biting paradox.”impact on Swedish society. A portrait bust of Marianne sat at the center of the gallery, and another outside under the rotunda of the Kunsthalle.”
— Ronald Jones, “Jane Doe ­­— on Måns Wranges The Average Citizen”, Frieze, #71, November/December 2002
”Based on years of extensive research and data gathering, it [the project The Average Citizen] deals with categorization and processes of normalization. By turning the ubiquitous processes that shape public opinion and guide decision-making into an artwork. Wrange has shed light on the fact these practices are not as neutral as they appear to be. Indeed, he questions their assumptions, the ways in which they are carried out and, of course, the reasons behind them. The result is not just enlightened re-runs of opinion polls, but a strange intervention into the development and production of knowledge and opinions. Obviously, at first glance, his activities and representations resemble the usual business of fact-finding and categorization. However, he has
altered the parameters associated with this pursuit. Instead of asking the usual questions–such as “Do you think political parties are corrupt?” – Wrange takes the game much further. […] Wrange’s is a well-meaning version of social democracy that borders on parody and yet still operates within the realm of day-to-day politics, and this is its strength. Without arrogance but with a strong dose of irony, it uses its own brand of bureaucratic rhetoric to shout out: is this how decadent actual issues of equality and solidarity have become? Is this what is left after our consenting capitulation to a consumer society that excludes the concept of failure.”
— Mika Hannulla, “What A joy: We Are all Social Democrats“, Todos somos pecadores, Museo Tamayo, Mexico City 2003